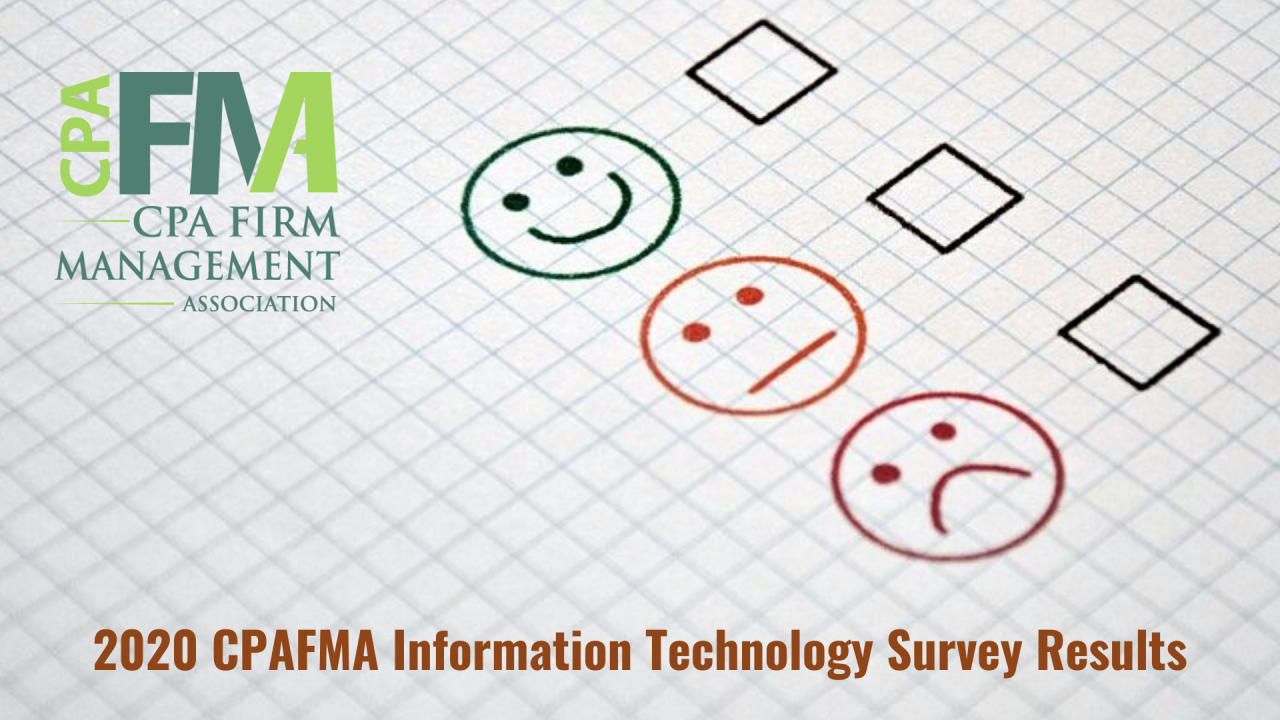 The CPA Firm Management Association (CPAFMA) conducted its third comprehensive technology survey in late 2019 tailored specifically to member firms with the goal of identifying the applications, products and processes utilized by peers.  Where possible, the survey attempted to identify which applications firms are moving to in the cloud compared to traditionally on-premise managed solutions.  The survey was conducted in December 2019 to determine what information technology firms would be utilizing in 2020 and compared to the results from previous surveys where appropriate.  This survey further highlighted the unique nature of CPAFMA member firms which tend to be medium and larger sized firms.  178 CPAFMA members participated, 89% of which had 10 or more personnel, and more than half (53%) were multi-office. The findings of the survey are summarized below and were presented by CPAFMA Advisory Board Member Roman Kepczyk via MAPCast on Friday, December 19, 2019 which is available on the CPAFMA.org website.

Server Infrastructure:  The 2020 survey was consistent with the 2018 survey where more than half (51%) of responding firms utilize an external cloud provider to host the majority of their applications.  This year’s survey also found the number of firms internally managing their own networks dropping from 40% to 38% which highlights the continued trend towards peer firms moving everything towards the cloud. While twelve responding firms utilized CCH Axcess and two selected Thomson Reuters Virtual Office, the majority of participants were utilizing “private” cloud hosting vendors.  Right Networks/Xcentric led the private hosting vendors with 73 member firms, followed by Ntiva and NMGI having two respondents each.  Of the firms that managed their own networks, seven (4%) utilized a third party “colocation” facility which provided more robust security, power and Internet access than can be found within most firm offices.

Server Virtualization: Virtualization continued as a very strong trend with two-thirds of responding firms adopting this technology either internally or through their cloud vendor.  Simply stated, virtualization runs each application in its own “virtual server” providing great stability for accounting applications by minimizing conflicts.  While many respondents indicated they were not sure of what their virtualization strategy was, VMware was the preferred choice of 45% respondents, followed by 40% of firms choosing Citrix Xen, 9% selecting Microsoft Hyper V, and 3% selecting VDI (Virtual Desktop Interface), which continues to trend in corporate environments outside of the accounting profession.

IT Staffing: Traditional accounting firm metrics have pointed to firms needing one IT equivalent staff person for every 25 to 32 firm personnel.  This year’s survey attempted to verify this number differentiating between firm size and internally managed versus externally managed networks.  Respondents from large firms (100+ members) had a 1:36 ratio between IT personnel and total personnel in traditionally networked firms, compared to a 1:53 ratio for those in the cloud, pointing to cloud providers taking on a significant portion of the IT burden.  This was also evidenced in firms between 50 and 99 members as traditional firms had a 1:28 ratio compared to cloud hosted firms with a 1:48 ratio. For firms with 20 to 49 members, traditional networks were at a 1:28 ratio compared to cloud firms which surveyed at a 1:32 ratio.  The IT Staffing responses for firms with less than 20 members showed a 1:20 staffing ratio in traditional firms compared to 1:22 in the cloud pointing out that cloud adoption reduces internal staffing requirements in all firm sizes.

Significant Downtime: Another new question this year sought to identify what events caused significant downtime in the previous 12 months, with the number one item being Internet outages which impacted 21 firms.  Close behind were 20 firms that experienced cloud host outages. This was followed by twelve firms that experienced hardware failures which was up from seven in 2018.  Only one firm was impacted by Ransomware (compared to six in 2018) and one impacted by viruses and malware, which was a reduction from the three in 2018 and the 17 firms impacted in the 2016 Survey.  While the survey found BitDefender to be the most selected anti-virus application with 37 firms, there were 11 other applications that were utilized by at least two peer respondents, so virus applications have the least amount of consensus of any application in responding firms but appear to be working better across member firms.

Backup Options:  For traditional on-premise data backups, eight respondents still utilized tape backups and 38 respondents (269%) backed up to hard disks or solid-state drives, which we have seen to be more reliable and easier to utilize to restore files from than from tape.  The bigger trend of member firms backing data up offsite via Internet-based solutions increased to 68% of respondents compared to 64% in 2018, pointing to web-based backups as becoming the overall standard.  The survey also asked about backup frequency and 82% of respondents backed up daily, up from 73% in 2018, pointing out the standard.  The survey found 7% backed up their data weekly, 5% between two and six times per week, and 6% listed “other.” Once again, the variety of applications utilized by firms was significant with no one application having more than a handful of users.

Workstations: Dell still leads the pack for desktop brands with 65% of respondents making them the first choice followed 19% by HP and 10% by Lenovo.   For laptop brands, Dell was not as dominant with 58%, but continued to be one of the top three brands along with HP at 19% and Lenovo at 17%. Within the remaining “other” computers were three firms selecting Microsoft Surface PCs, which was a slight reduction from 2018. The most popular laptop configuration continued to be a 15.6” with full keyboard (including a ten-key number pad) at 63% of respondents, followed by 21% of firms buying 17” models as their standard, compared to 13% selecting 14”-15” with the standard keyboard and 2% buying 13” or smaller (including Microsoft Surface PCs) without an integrated number pad in the keyboard. The survey also asked what computer processors firms were planning on purchasing in the year ahead and 58% selected Intel’s i7, 30% Intel i5, and 9% adopting the latest i9 processors.

Workstation Software:  It comes as no surprise that Microsoft Windows is the dominant operating system with 97% of firms utilizing Windows 10 and only 2% responding with Windows 7.  As security support for Windows 7 expired on January 14, 2020 it is anticipated that 100% of member firms will be on Windows 10 for the 2020 tax season.  While there were two firms utilizing Apple iOS in 2018, there were no responses for 2020.  Regarding Internet Browsers, Google Chrome was utilized by 78% of member firms (up from 65% in 2018), followed by Microsoft Edge/Explorer at 16% (down from 31% in 2018). Five firms stated they utilized Firefox and the remainder stated they utilized a variety of applications.

The 2020 survey found that the majority (77%) of firms had transitioned to Office 365 which was a significant jump from 24% in 2018.  While 15% were still on Office 2016 and 4% on older versions, the findings point to firms upgrading to Office 365 when their current licensing/needs expire instead of purchasing “Box” software licenses which was the standard for the previous two decades allowing firm to “skip” one or two upgrades. Adobe 12/DC was the dominant PDF application with 73 firms (51% of respondents) standardizing on it, followed by 29 firms (20%) primarily on Adobe Acrobat 11 and 17 firms (12%) on Adobe Acrobat 2017. 11 firms listed Adobe 10 and 8 firms listed Doc-It’s PDF program.  With technical support being discontinued for versions 11 and older we anticipate a push in firms going to the 12/Document Cloud version which is consistent with firms adopting annual cloud subscription pricing for an increasing number of applications.

Monitors: The survey specifically asked for the standard monitor setup which pointed to 80 members (53% of responding firms) utilizing triple monitors as the standard.  This was followed by 41 firms (27%) using dual standard monitors greater than 20”, and 19 firms (13%) utilizing traditional monitors less than 20”, which flip-flopped from the 2018 survey findings.  Eight firms (5%) utilized quadruple monitors which combined with oversize and triple amounted to 87% of firms using more than dual standard in this year’s survey.

Tablets: The reduction in the number of firms providing tablets to firm members continued in the 2020 survey with 21% of firms providing them to partners (compared to 24% in 2018 and 34% in 2016).  Firms that supplied managers with tablets was at 4% in this year’s survey compared to 6% in 2018 and 10% in 2016.  Of those firms that provided tablets, 11 were Apple iPads and eight were Microsoft Surface which points to Surface devices gaining popularity.

Phone System: A new question added in 2018 survey asked what type of phone system firms utilized to determine how many were going to the web-based Voice Over IP (VOIP) services.  While the majority (55%) continued to use a traditional on-premise phone system, 45% firms responded that they had transitioned to an external VOIP system which was a 10% increase in two years...  In our consulting with firms, we have found most firms search out service providers to maintain their existing phone system until the vendor can no longer provide support at which point they transition to external VOIP solutions as a more cost-effective solution (but still a significant capital outlay). The survey asked which vendors peer firms utilized and no individual provider tallied a majority with Cisco, ShoreTel, Avaya, and RingCentral most often listed.

Scanner Technology: The 2020 survey found that 88% of firm utilized centralized scanning which was up from 84% in 2018. The number of firms using distributed or shared scanners dropped from 79% of firms in 2018 to 57% in 2020.  There was also a reduction in the number of firms having some users with individual scanners (55% in 2018 and 51% in 2020.  Fujitsu continued to be the top production scanner vendor of choice with 64% of respondents followed by Canon at 25%, Ricoh at 4%, Konica and Xerox both at 3% and Kodak and Sharp at 1%.

CPA Practice Applications: Below we summarize the administrative applications which CPAFMA peer firms utilize to run their internal operations.  The number of firms selecting either on-premise or cloud applications have been identified where possible and point out a continued transition towards cloud adoption either for the entire firm or individual applications.

Collaboration/Instant Messaging: Microsoft Teams was the most utilized collaboration tool with 68 firms responding followed by 23 firms selecting Skype for Business (formerly Lync and Office Communicator) placing Microsoft in the dominant position (again due to integration with Office 365).  This was followed by seven firms utilizing Zoom, four using Slack and three using GoToMeeting.

Document Management (DM): Of the firms that answered the DM question, 43 utilized Thomson products (30 GoFileRoom/13 File Cabinet Solution) and 27 utilized WoltersKluwer/CCH’s Document Management (15 On-premise and 12 in Axcess).  Doc-It made significant inroads once again in this year’s survey with 14 member firms utilizing the application (up from seven in 2018). Overall, the majority of firms utilizing document management, utilized applications hosted in the cloud supporting the transition to cloud trend.

Tax Applications: This survey was combined with the previous SaaS/Cloud survey with the intent of identifying which applications are moving to the cloud as there have long been tax, document management portal and research tools available.  Below we summarize the tax application trends within CPAFMA peer firms.

Audit and Accounting Applications: The survey also asked questions specifically in regards to assurance services to identify adoption of the following applications and utilities:

IT Governance: The vast majority of peer firms (96 firms representing 69% of respondents) utilized a technology budget that was reviewed at least annually.  Surprisingly, only 59 firms (42%) had a designated IT Committee.

IT Training Resources: The survey once again had respondents list the best training resources with the most firms selecting the accounting vendor user conferences: WoltersKluwer/CCH (20 firms), Thomson Reuters (12), Right Networks/Xcentric Webcasts (10), and XCM (three). This was followed by 18 firms the AICPA ENGAGE (formerly TECH/Practitioners Symposium) conference and 11 listing the CPAFMA National Symposium/Technology Webinars.

Cloud Future: The survey’s final question asked when the respondent believed that the majority of CPA firms will run entirely in the cloud with no local servers.  A surprising 30% estimated it would happen between 3 and five years, another 39% thought it would be between five and ten years while 14% believed it would take 10 years or longer.  Only 16% estimated that it would be less than three years, which we would agree with by quoting Bill Gates when he was Microsoft’s CEO:

Roman H. Kepczyk, CPA.CITP, PAFM is the Director of Firm Technology Strategy for Right Networks and works exclusively with CPA firms to implement today’s leading best practices and technologies incorporating Lean Six Sigma methodologies to optimize firm production workflows. Roman is also the author of “Quantum of Paperless: A Partner’s Guide to Accounting Firm Optimization” which is available at Amazon.com.