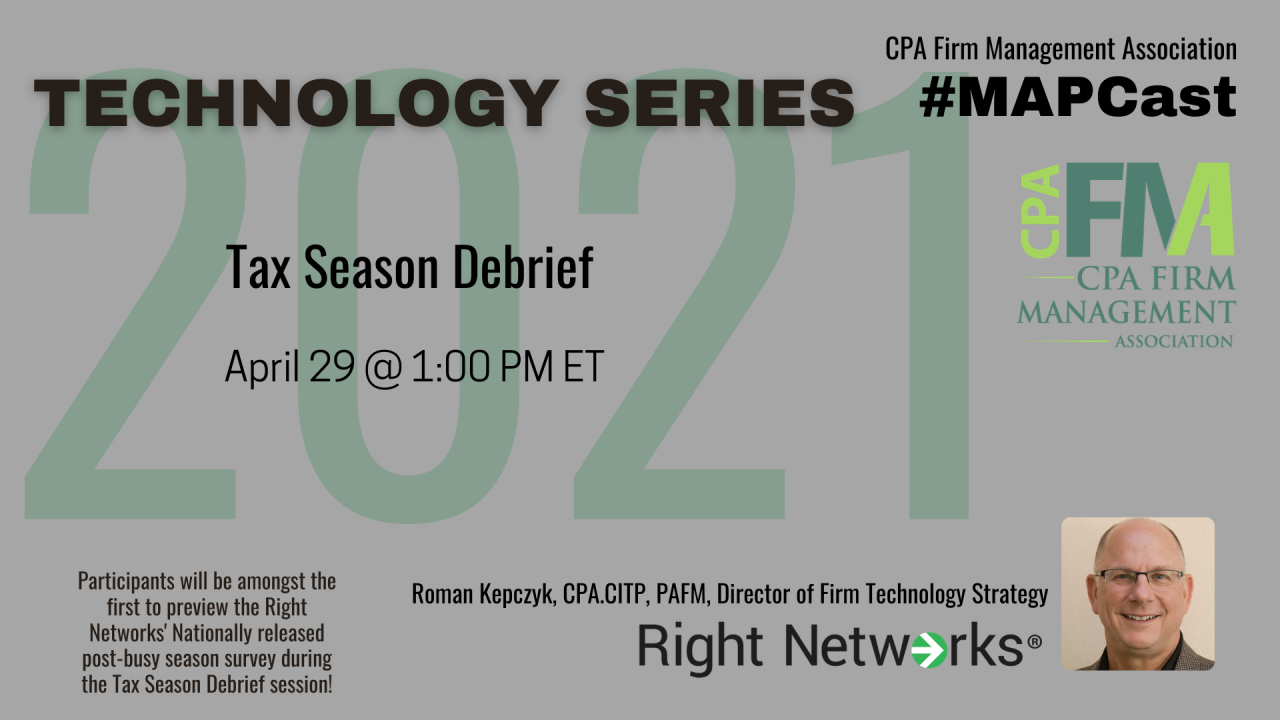 Entire Series - Register for the entire series and save!
$100 Members | Free PAFM | $225 Non-Members

Join us for this 60-minute MAPCast to learn more about optimizing your firm’s tax production processes and be amongst the first to preview the Right Networks’ Nationally released post-busy season survey during the session! Presented by Roman Kepczyk, CPA.CITP, CGMA, PAFM, Director of Firm Technology Strategy, Right Networks.

Want to optimize your firm’s tax production processes? The first step is debriefing how this busy season went and identifying opportunities to fine-tune and improve your firm processes in alignment with today’s proven technologies.

Roman will walk through best practices in conducting a tax season debrief meeting including facilitation skills.  He will also incorporate key future indicators and disrupters that all firms should be aware of to plan for next year and beyond.  Roman will highlight specific examples within the tax production cycle where “Lean” principles can be successfully applied. Participants will be amongst the first to preview the Right Networks’ Nationally released post-busy season survey during the session!

Roman Kepczyk, CPA.CITP, CGMA, PAFM
Roman H. Kepczyk, CPA.CITP, CGMA, PAFM is Director of Firm Technology Strategy for Right Networks. His primary focus is helping firms throughout North America effectively use information technology and accounting applications by optimizing their tax, audit, and administrative production workflows. He has spent the past twenty-two years consulting exclusively with CPA firms and prior to that, ten years with the CPA firm of Henry & Horne, (Arizona’s largest regional firm) where he was the partner in charge of the firm's Management Advisory Services and Consulting practices. Roman also served as the firm’s Administrative partner where he oversaw Internal Accounting, Marketing, Human Resources, and was responsible for the creation and implementation of the firm's technology plan and budget. He is a member of the AICPA Council, a former member of the AICPA PCPS Executive Committee, and a former Chairman of the AICPA's Information Technology Executive Committee. He has served as a member of other AICPA initiatives, including the Special Committee on Enhanced Business Reporting, eBusiness Task Force, IT Best Practices, IT Research, IT Practices Committees, and Group of 100 projects. In addition, he is a former Chairman of the AICPA Top Technologies Task Force. Roman was named by INSIDE Public Accounting as one of the profession’s Most Recommended Consultants for each of the years from 2005 through 2017, CPA Practice Advisors "Top 25 Thought Leaders" from 2011 through 2019, and Accounting Today’s "Most Influential People in Accounting" thirteen times. Roman is also an Advisory Board Member to the CPA Firm Management Association and has served on the Board of Directors of the Arizona Society of CPAs. He also authored “Quantum of Paperless: Partners Guide to CPA Firm Optimization” which outlines 32 key CPA best practices. On a technical level, Roman is an AICPA Certified Information Technology Professional (CITP) and a Certified Lean Six Sigma Black Belt (LSS BB). He authored technology chapters for the PPC MAP Handbook, PPC Guide to Paperless Engagements, and sections of the AICPA MAP Handbook. He is also a regular contributor of articles to the AICPA PCPS, CPA Practice Advisor, Thomson Reuters Audit and Accounting publications, and the CPA Firm Management Association’s newsletters.